The Beechcraft Bonanza 36 series Vapor Cycle System (VCS) air-conditioning system is not a primary flight system. However, the system does perform the very important function of providing pilot and passengers comfort while the aircraft is on the ground, taxiing or in flight. Aircraft air-conditioning systems must not only provide effective passenger cooling, but must also maintain a high reliability level to minimize aircraft downtime.

The Beechcraft Bonanza 36 series (Vapor Cycle System) air conditioning system consists of an engine driven compressor, a condenser/fan module, a receiver-dryer with Trinary pressure switch and an evaporator with an expansion valve and evaporator coil temperature sensor. Refrigerant barrier hoses connect the components. A combination of Steel and Aluminum fittings are used.

The system is controlled by an Electronic Control Unit (ECU) that will control the air conditioning and heat automatically or manually. Also incorporated into the ECU is a safety feature that will turn off the A/C in the event of an alternator failure or electrical over load. The system completes a diagnostic test each time it is turned on. There is also an advance diagnostic feature that is designed primarily for technicians.

The condenser receives high-temperature, high-pressure vapor from the compressor. The assembly is located in the empennage and draws air from the empennage compartment and vents the exhaust air overboard through a side duct in the aircraft. The refrigerant vapor enters at the upper fitting of the condenser. As the vapor flows through the condenser,it releases heat to the cooler ambient air flowing over the condenser.

The ECU is located in the center console, beneath the instrument panel. It regulates the evaporator blower speeds and heater. Additionally it provides outputs for actuator positions as required.

When air conditioned air is required, the evaporator blower is actuated and air is distributed through the duct in cabin ceiling and in the rear panel behind the baggage area.

When cockpit heat is required, the compressor and evaporator blower are turned off and the existing heater in the forward cabin is turned on. Heated air is distributed approximately 90% to the floor ducts in the cockpit with the remaining air being diverted to the defog ducts.

When the Defog " " mode is selected the existing defog valve is activated at and air is distributed to the windscreen. Temperature selection on the digital Switch Panel regulates the temperature of the defog air.

The evaporator removes heat and moisture from air entering the aircraft cabin. The unit is located in the empennage just aft of the aft cabin bulkhead. This assembly utilizes a plate and fin type evaporator coil.

The VCS compressor is engaged by a 12V/28VDC magnetic clutch driven by a V-Belt off the back of the engine via the Teledyne Continental Motors (TCM) accessory drive. The magnetic clutch is switched off during air conditioning operation anytime the refrigerant system pressure drops below 29 psi (2 bar) at the Trinary switch or anytime the high-pressure side of the refrigerant system rises above 397 psi (27 bar).Type your paragraph here.

The Beechcraft Bonanza 36 Series utilizes a swash or wobble-plate-type axial compressor. The displacement of the compressor is 147cm3. The compressor cycles to regulate cabin temperature and to avoid evaporator coil freeze-up. 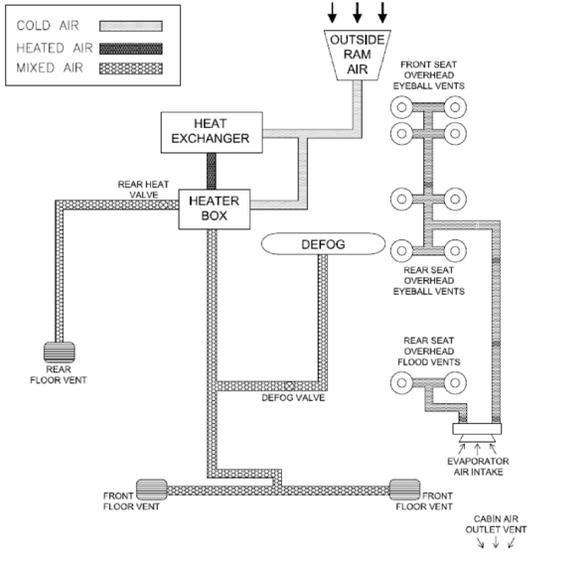 The Receiver/Dryer acts as a storage and filter unit for refrigerant and oil. The Trinary switch serves two functions. One portion of the switch cycles the condenser fans once the refrigerant pressure reaches 235 psi (16 bar) and turns off the

Heated air temperature in the cabin is adjusted via the existing rear cabin heater valve. During the heating mode, the Heater Temperature Actuator opens and regulates the existing rear cabin heater valve via the existing cable actuation. This actuator is located behind the instrument panel. Its adjusting range extends from "heating final stop" (all air channeled from the heat exchanger) to cooling "final stop (no air channeled from the heat exchanger)". The Rear Heat Temperature Actuator is activated according to the position selected on the Rear Heat Rocker Switch located on the ceiling console, between the first and second rows of seats. This location allows both front and rear occupants (in the second row) to adjust the rear heat independently of the cockpit heat. The bar indicator, indicates the % of rear heat that is selected.

at 190 psi (13 bar). The other portion of the switch protects the system from damage due to low refrigerant or excessive pressures by turning off the compressor. Power to the compressor is interrupted once the refrigerant pressure drops below 29 psi (2 bar) or exceeds 397 psi (27 bar) at the Trinary switch. The Trinary switch automatically resets once pressures are restored to a safe level. The receiver/dryer assembly is located in the empennage of the aircraft, adjacent to the condenser/fan assembly.

The tubing is hydraulically expanded into the fins to ensure good thermal conductivity. Low-pressure liquid refrigerant from the expansion valve enters the evaporator. Because of the reduced pressure, the refrigerant boils into a vapor. The boiling refrigerant absorbs the heat from the incoming air as it changes from a liquid to a vapor. 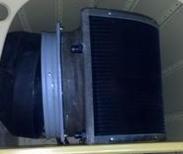 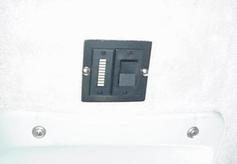 The evaporator blower draws cool, dry air from the evaporator assembly and ducts it into the existing overhead cabin vent system.

signal from this sensor to calculate the temperature for the Outside Air Temperature (OAT) indication on the digital Switch Panel display. 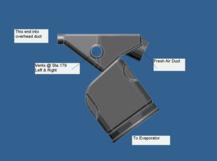 exchanger)". The Cockpit Heater Temperature Actuator is activated according to the temperature selected on the digital Switch Panel located in the cockpit.